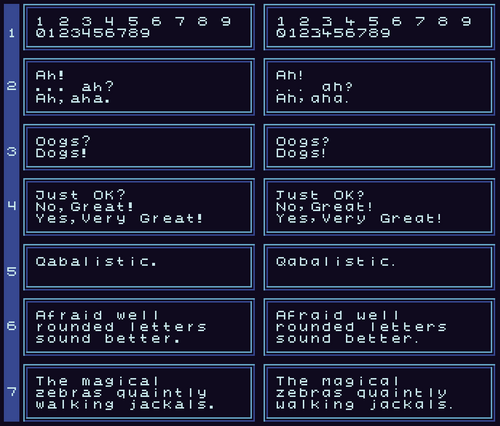 In this devlog I will explain in detail the changes I made to the default font provided with the Sample Project in GB Studio 1.2. Most changes were based on readability but some were aesthetic choices based on my font Bridge Parapet v4 (available for free on itch.io). There are 7 figures in the image above that I will refer to, changed font is on the left, original is on the right.

The numbers 1 and 4 were made more balanced in shape because even though most changes seem to make the characters more round, for readability reasons, I was still going for a font leaning towards the themes of sci-fi and computer console. The number 3 was rounded for readability. The digit 0's slash, which is there to distinguish it from the letter O, was flipped for aesthetic reasons.

The exclamation mark was widened to deliver more impact. The same for the full stop. The question mark was made bigger for readability. The comma was lowered for the same reason.

The letter D was 2 pixels away from becoming an O and it would be hard to distinguish the two in some cases not involving words but codes for example, as such I changed it.

J was made more balanced and the G was rounded. As for K, Y and V - they could've stayed unchanged however, as mentioned earlier, I wanted to make the font theme somewhat sci-fi.

I made a small changes to the Q for aesthetic reasons, it might however be a little bit less readable.

These changes aren't final, I may change the font further in the future or even revert some changes. You may apply these changes to your own project's font or however you like.